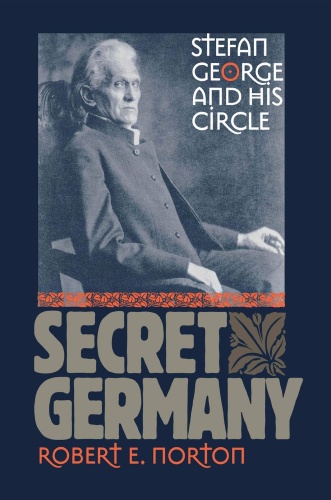 About Secret Germany Stefan George and His Circle by Robert E Norton :

Stefan George (1868-1933) was one of the most important and influential poets to have written in German. His work, in its originality and impact, easily ranks with that of Goethe, Holderlin, or Rilke. Yet George's reach extended far beyond the sphere of literature. Particularly during his last three decades, George gathered around himself a group of men who subscribed to his homoerotic and idiosyncratic vision of life and sought to transform that vision into reality. George considered his circle to be the embodiment and defender of the "real" but "secret" Germany, opposed to the false values of contemporary bourgeois society. Some of his disciples, friends, and admirers were themselves historians, philosophers, and poets. Their works profoundly affected the intellectual and cultural attitudes of Germany's elite during the critical postwar years of the Weimar Republic. Essentially conservative in temperament and outlook, George and his circle occupy a central, but problematic, place in the rise of proto-fascism in Germany. Their own surrogate state offered a miniature model of a future German state: enthusiastic followers submitting themselves without question to the figure and will of a charismatic leader believed to be in possession of mysterious, even quasi-divine, powers.When he died several months after the Nazi takeover, George was one of the most famous and revered figures in Germany. Today the importance of George and his circle has largely been forgotten. In this, the first full biography of George to appear in any language, Robert E. Norton traces the poet's life and rise to fame
Thanks for downloading Secret Germany Stefan George and His Circle by Robert E Norton :